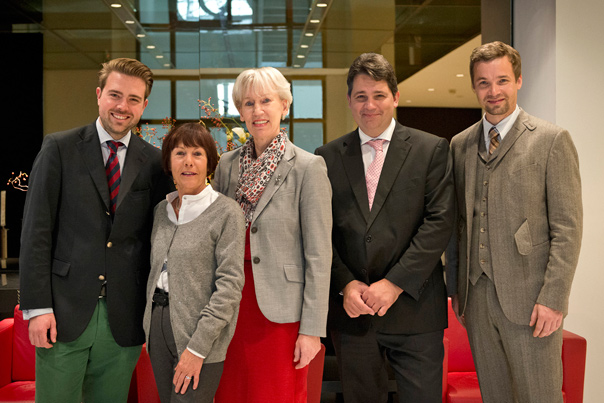 The Bert Kaempfert Foundation was established by his daughter Doris in 2012; it has legal capacity in civil law and is domiciled in Hamburg, Germany.

The Foundation aims to promote the arts and culture, especially to provide support for young musicians such as composers, arrangers and performers whose talent and outstanding achievements deserve promotion.

The Foundation was officially launched on the occasion of the 90th anniversary of Hamburg’s pioneering musician Bert Kaempfert, who passed away in 1980.

On 16 October 2013 relations, friends and associates commemorated Bert Kaempfert’s 90th anniversary in the Hamburg casino on Stephansplatz. Hamburg’s Senator for Culture, Prof. Barbara Kisseler, chose this occasion to present a sponsorship certificate to the newly founded Foundation represented by his daughter Doris (second from left) as well as by members of the board, Sebastian Kaempfert (left), Jörg-Achim Keller (second from right) and Marc Secara (right). Dagmar Sikorski, manager of Sikorski music publishers, gave an honorary speech.

Culture Senator Prof. Barbara Kisseler: “Bert Kaempfert was an important musician, music producer and composer from Hamburg and a pioneer for future generations. With this sponsorship certificate we wish to support the Bert Kaempfert Foundation’s aim of promoting Hamburg’s art and culture and to underscore its importance.”

Doris Kaempfert: “This gives me a great deal of pleasure, for I couldn’t imagine a better beginning for the future work of the Foundation.”